Flooding due to snow melt and rain has been in progress in the Dakotas and neighboring states for several weeks.  Now the Mississippi River flood crest is  forecast to move slowly downstream toward New Orleans in the next three weeks. More than 180 locations over several states are currently experiencing flood.

Other resources can be found on eXtension. Learn what you can do to reduce damage caused by floods, how to prepare your family for disaster, and more.

The Ready Campaign has forwarded the latest North Central U.S. Flood Risk from the Hydrologic Information Center of the National Weather  Service.  There is a concern for moderate to major flooding in much of the upper Midwest due to saturated ground, snow cover and later snow melt.  In addition there was been rapid snow melt in parts of the mid-Mississippi basin last week resulting in flood warnings on several rivers and streams.

Here is the text of the Ready Campaign message:

For the third consecutive year, moderate to major flooding is expected along the Red River of the North, which forms the state border between eastern North Dakota and northwest Minnesota and includes the Souris River Basin and the Devils Lake and Stump Lake drainages in North Dakota.

There are several reasons for the anticipated floods:

The areas of greatest flood concern are:

Red River of the North in North Dakota and Minnesota

James River and the Big Sioux River in South Dakota

Several days of above normal to record warm temperatures across the center of the country has melted much of the snowpack from the central Plains to the northern Ohio Valley.  This runoff, along with ice jams in some areas, has resulted in minor to locally moderate flooding.  More than 40 river forecast points from southern South Dakota to northern Ohio either have reached or will exceed flood stage by Sunday, with a handful reaching moderate flood stage.  Over 100 additional river forecast points are or will be near flood stage.

While significant impacts are not expected, the flooding will affect local roads, agricultural lands, and river parks.
A storm system moving out of the Rockies this weekend is expected to bring more precipitation to this area on Sunday and the early part of next week.  This may prolong high river levels or cause more extensive lowland flooding.
Regards, Virginia Morgan, EDEN Chair

While the winter storms had more people being colder, longer than ever before, it also dropped record amounts of snow across the country’s mid-section and up toward New England. All that snow sits trapped by the cold – like so much water behind invisible dams that will release their impoundments as temperatures rise. So, without so much as a drop of rain, many places around the country will be looking at significant floods.

The snow-melt floods, the resulting fullness of the river systems, and the often super-saturated or still-frozen condition of the ground, will exacerbate rain-induced flooding. Rivers and streams will be more prone to flooding in rain storms that would not have otherwise produced floods. It is a particularly difficult year for flood forecasters in much of the country, because the rate of release (snow melt) is uncertain. 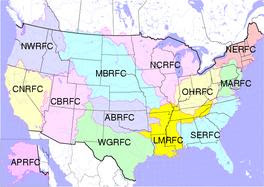 NOAA’s National Weather Service (NWS) operates thirteen River Forecast Centers across the United States. River Forecast Centers collect, process, and provide forecasts and information about water resources for major river basins across the country. This network is supported by the extensive gauge system of the US Geological Survey (USGS) and gauges operated by the Corps of Engineers and others.

The USGS WaterAlert widget on the EDEN Floods and Flooding page allows the user to get past and present readings, but forecasts are provided by the National Weather Service. Delegates should touch base with local emergency managers to see what is being predicted for their area. 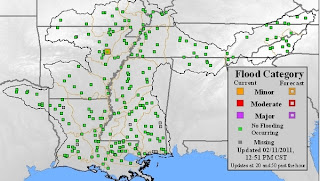 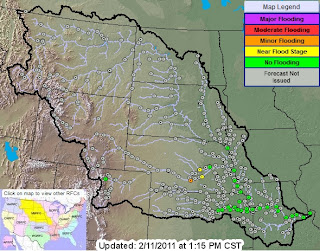 The situation up north – in the Missouri Basin RFC – is mostly unpredictable (based on the number of grey gauges (forecast not issued)).  Down south, in the Lower Mississippi RFC area,  we’ve got one gauge where minor flooding is predicted in the near term. But lots of snow fell above us.

We have asked the Association of state Floodplain Managers to help us get a national perspective and outlook. What are the hot-spots for snow-melt flooding? Where is the Corps preparing for flood flight operations?

EDEN will be conducting a series of flood help Webinars to help our educators know where flooding is anticipated; and how we can help our citizens deal with the threat, stay safe, and protect their properties and pocketbooks from flood damage. Webinars are being announced by e-mail and through the EDEN News and Features. The first Webinar is scheduled for February 21.